This was an experiment following an incredibly busy day and was prompted by the neglected squash that had been in the pantry (large cupboard in the kitchen) for over a month.

Having also recently received a bumper delivery of broad beans, it seemed only natural to have a go combining the two.

The latest soring temperatures in the UK (sweltering heat) inspired a salad as follows:

This would likely serve 4 for lunch, or make two large dinners with enough leftovers for lunch.

The consensus on this one is that Ben would eat it and have seconds.

This was an experiment following an incredibly busy day and was prompted by the neglected squash that had been in the pantry (large cupboard in the kitchen) for over a month.

And not the wicked ones, unless you’re that way inclined. There was a recipe in one of the free London papers a few weeks back, that was adapted from its rather bland first appearance.

In case it isn’t obvious, here’s the carrot fritter recipe:

It doesn’t take much by way of explanation. Quite frankly you just mix the lot and spoon fritter-sized amounts into a pan of hot veg oil. Then shallow fry, and prompty follow this up by draining off all that healthy oil on a piece of kitchen roll. It’s really very simple.

Ben would eat this one, it tastes rather dandy.

Strawberries are in season, so… 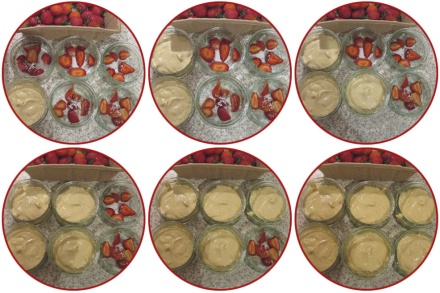 I had a go at making some mini sponge cakes, inspired by a recent bumper delivery of strawberries in the weekly veg box. As with most desserts I make, I was designing it to be super-quick, so all mixed in the food processor. A once-thought-to-be cardinal sin, now I swear by it. I threw a little ground almonds into the sponge mix and just favoured it with vanilla.

Recipe needs ironing out as cakes didn’t come out exactly as planned (it was more a crusty topping with a gooey vanilla filling – strawberries bringing up the rear). I’ll post the recipe once it is vastly improved, but I was reasonably happy considering they were a first attempt. They were still edible. Ben may not have eaten them though.

…Martha fricking Stewart. A little sloppy-Joe in consistency, but tastes damn fine – so much so that it got two avid meat fans reaching for bun number two. Served it up with the usual melted, sharp cheddar and salad.

This burger recipe is multifaceted however, a discovery made upon making too much mix for three people. So with the left-overs we made small, falafal-sized balls, lightly fried them and made some darned fine pitta filling, served up with home-made houmous and spicy tomato ketchup. 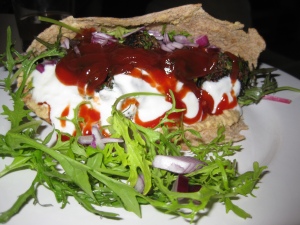 The houmous consisted of:

If you don’t have a blender it is possible to pummel the chickpeas and associated ingredients in a pestle and mortar. You won’t get the same consistency but still the same idea. 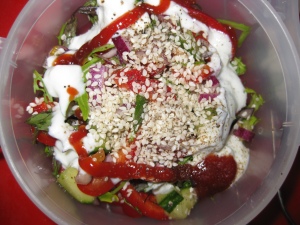 What better way to begin a food blog, than with some food. Clearly I’m not offering food right now for eats,  just the stuff you see in photos rather generously accompanied by details on how to make it. 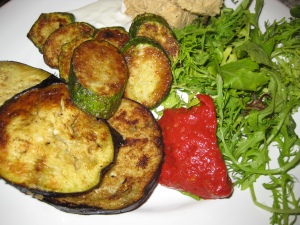 Let’s call this one “Fried&Floured, Courgette&Aubergine & a little bit of everything else”. Let’s also call it less of a name and more of a description.

Then serve with rocket, houmous, yoghurt (obviously minus this for a vegan version) and chilli sauce or whatever you fancy/have laying around.

This happened to use up a lot of left-overs out of the fridge, so was really quick and was promptly woofed down by two hungry Londoners. Not to mention I’d already eaten a slice of cake upon arriving home. It’s a new thing, dessert first.

We’re diversifying the freezer by means of introducing more things (other than soup) to it. This meal brought about that revelation, so I thought it only fitting to title this post as such.