I found this amazing recipe while I was eating a raw food only diet. The one I made recently was totally vegan, I used carob powder, and it went perfectly with the strawberries and raspberries I had bought that day at Borough Market in London.

This is such a simple recipe but does require a food processor – or a large pestle and mortar if you’re feeling up for a bit of a workout.

This is from an American recipe so once again I’m doing the measurements in cups – for a conversion of cups to grams check out this site.

The mousse we made recently was very chocolately – I’d say equivalent of an 80% cocoa powder chocolate mousse. Served with fresh British strawberries and raspberries. Such a quick and easy dessert recipe and (depending on how much of that maple syrup is added) pretty healthy too. 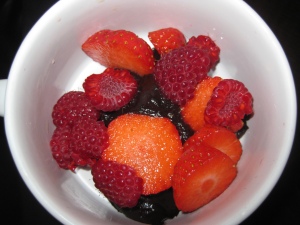