Last night we ventured forth to Camden for our second night of beer-matched-with-something-tasty at Brew Dog. Last time it was cheese and this time it was meat.

Brew Dog have worked with a small charcuterie company in London – the only one in London we’re told. These guys brought Picco Salumi premises in N1 off the previous owner 6 months ago and are rebranding as Cobble Lane Cured. Everywhere I can find they are referred to using the previous business name, including on Brew Dog’s own site. However, it seems they’re trying for a name change – so thought I’d mention that here.

Interestingly, Islington seems to be fostering a bit of a food movement according to an article in the Evening Standard from September 2013.

The evening began and ended with beer and meat. Over the course of 3 hours, we slowly consumed enough beer, bread and salami to keep us going for the duration.

As part of this meat-fest, there was some cured lamb (a violin of lamb was mentioned – this had to do with how you slice the cured meat if I’ve remembered correctly) that split opinion and a pepperoni that packed a punch. The following photos show meats #2 and #3 both of which were my favourites.

The beers went from very drinkable into the slightly murky territory of 18% alcohol content – those pokier beers don’t always appeal to me. We had the Punk IPA and Dead Pony – both two of my favourite Brew Dog beers, all would go perfectly with a beer stick. 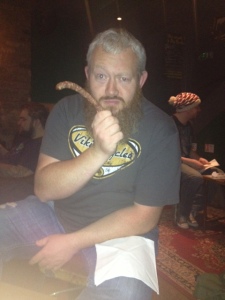 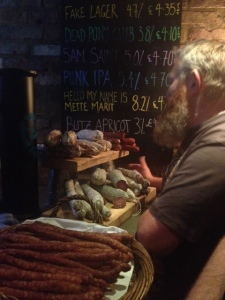 All the meat all the time – we purchased beer sticks. They’re good for fishing trips.

Along with the inevitable excitement of beer combined with awesome cured meat, it was also exciting to find out that Cobble Street Curing invite the general riff raff that is the public into their kitchens to see how the process works. Suffice to say, I know at least one bearded Canadian who will be taking them up on that offer.